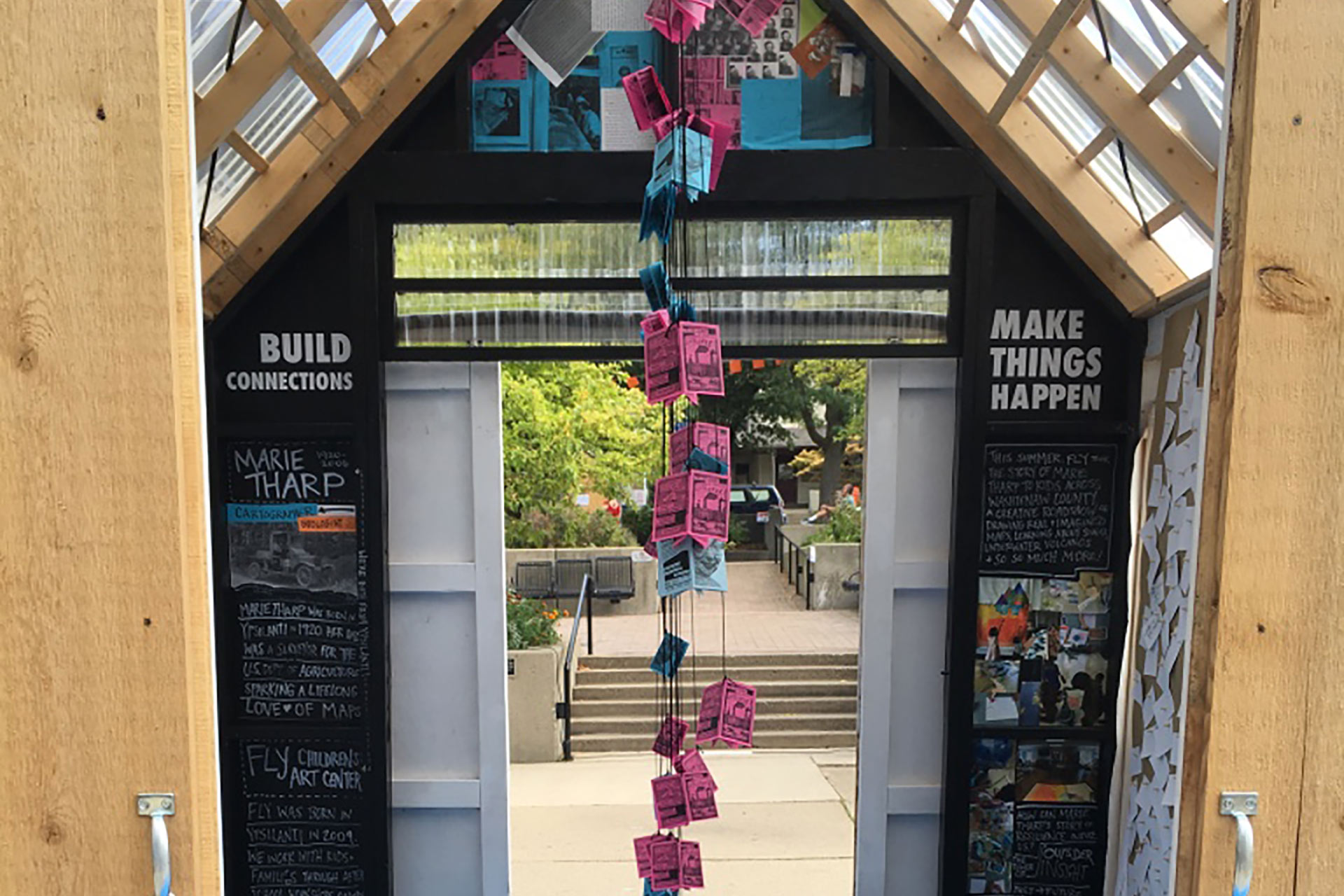 The Challenge: How can we share the world-changing achievements of a revolutionary mapmaker from Ypsilanti?

For an inland community like Ypsilanti, Michigan, the Atlantic ocean can seem very far away, to children especially. When our friend and geology professor Katherine Ryker mentioned that Marie Tharp, the woman who mapped underwater mountains at the bottom of the ocean (the Mid-Atlantic ridge), was born in Ypsilanti, ideas began to spark! As we dug in, we realized how her story might resonate with the community.

As a woman in science in the 1940s and 50s, Tharp wasn’t allowed to conduct research on ships, because “Women on ships were bad luck.” When she pivoted to cartography, and began to map, by hand, the bottom of the ocean using sonar data from the war, her ideas were dismissed— because at the time scientists believed that the bottom of the ocean was smooth and flat like the bottom of a swimming pool. Over time her work was recognized and her discovery of the Mid Atlantic ridge, the largest chain of underwater mountains, formed the basis of our understanding of how the earth was formed.

Partnering with FLY Creativity Lab (Laura Amtower and Allida Warn), Dr. Katherine Ryker from EMU’S Geology and Geography department and Dr. Cassie Byrd (formerly of the San Francisco Exploratorium), we set forth on an adventure to create a summer learning experience for youth that we could bring to community centers in the city. We applied for and were accepted to exhibit at POP-X in Ann Arbor, an interactive outdoor exhibit that provided small structures to artists to create engaging experiences in. Lastly, we partnered with Riverside Arts Center to transform their gallery into an exhibit.

The story of Marie Tharp is a rich one and provoked many questions that we wanted to address. What is sonar? Why are there mountains underwater? (The answer is great: Underwater VOLCANOS!) How are maps drawn? Who was Marie Tharp and how did she become a cartographer when women in sciences were rare at the time?

How can Tharp’s story of resilience inspire us?

How do we illuminate the unknown?

How can looking into the past shape the future?

By learning about Marie Tharp’s story, we would explore an example of a person who loved learning, who was resilient, and whose achievements had a huge impact of our understanding of the world. 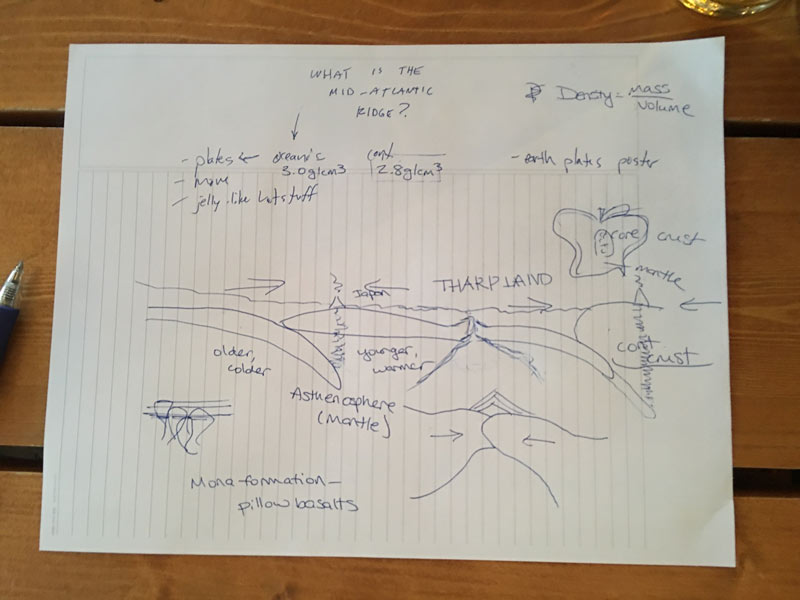 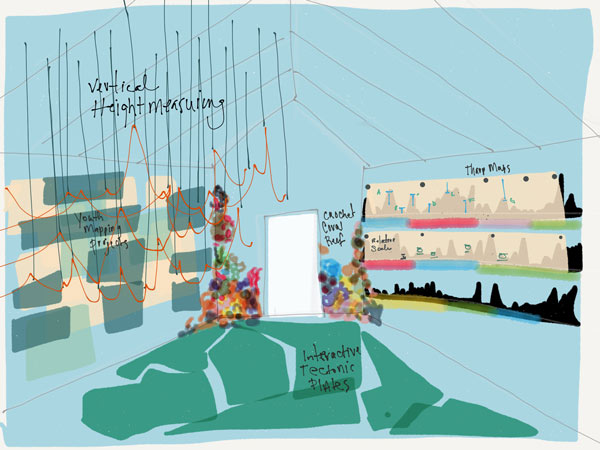 POP-X provided the structure, and we created the exhibit inside. Visitors experience the story of Marie Tharp on the walls of the building— through a mix of text, images and drawings. A flock of small zines were hung from the ceiling for visitors to take. Guests learned about sonar, underwater volcanos and mountains, and women in science. We encouraged visitors to wonder, about anything, by writing on post it notes, posting them in an area marked “Known” and “Unknown”. 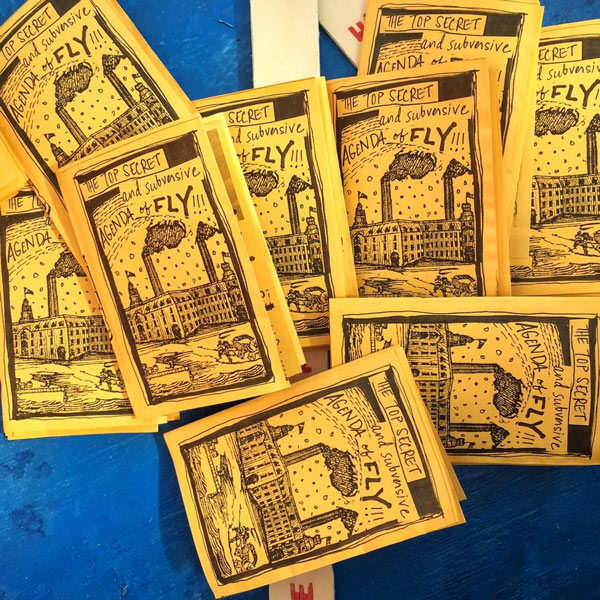 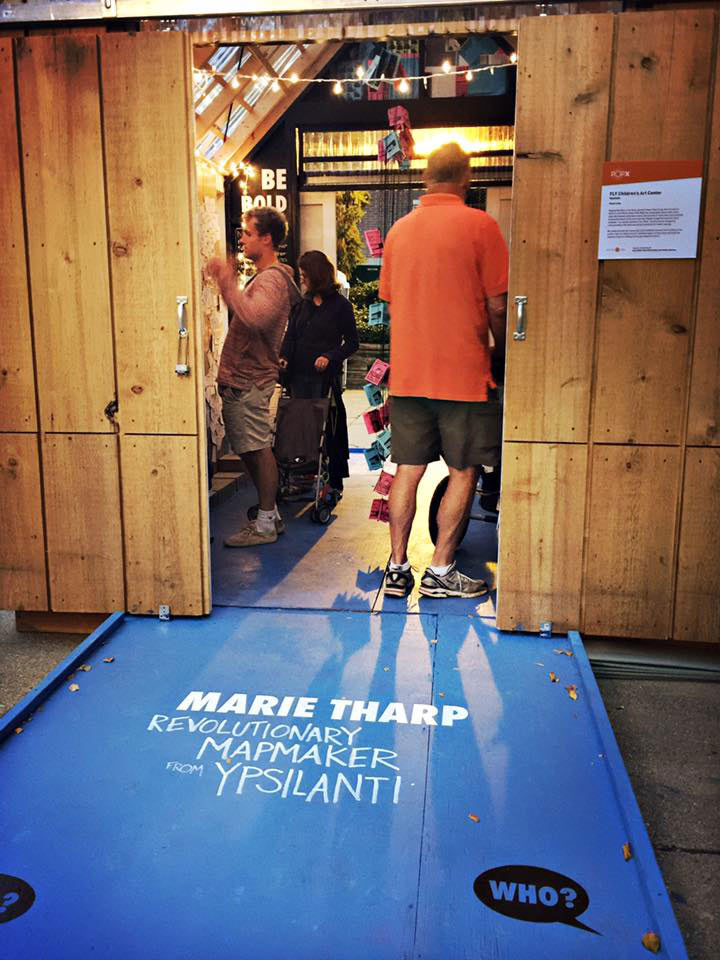 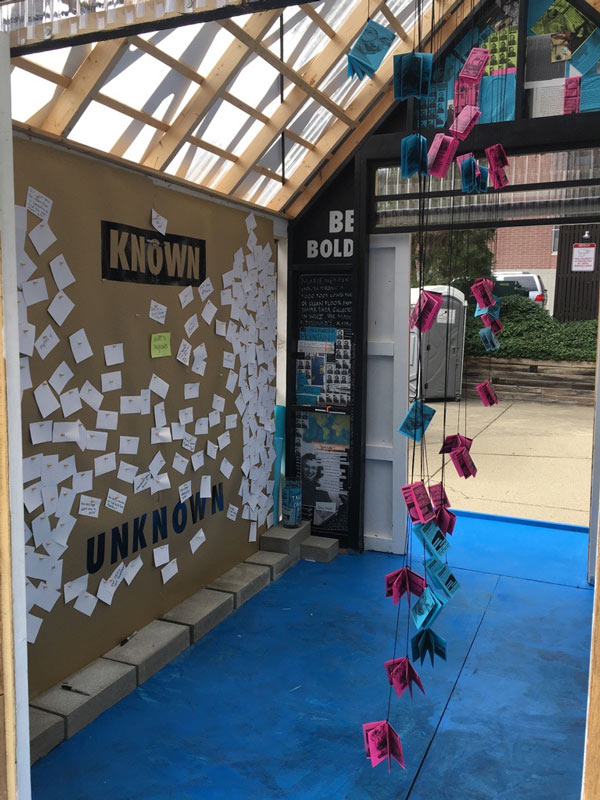 The exhibit Marie Tharp, Ypsilanti’s Revolutionary Mapmaker took place at Riverside Arts Center. The gallery included hands on activities: a station where visitors could understand how sonar worked and how you might measure an unknown depth. We explored mapmaking and ways to document our neighborhoods. We included a 3-D topographic map to play with. 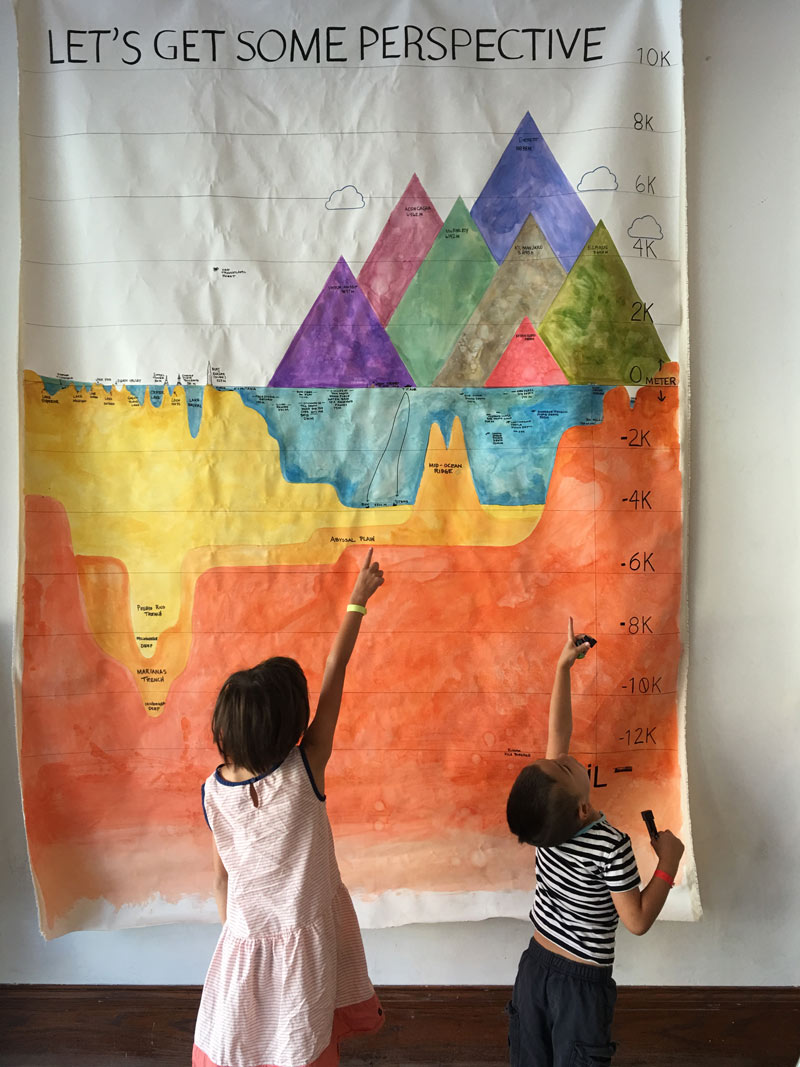 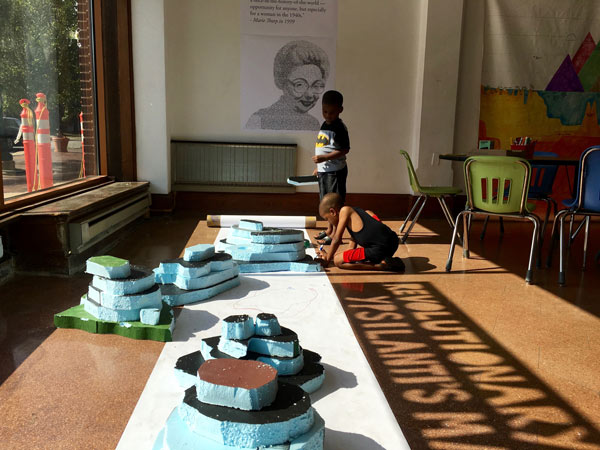 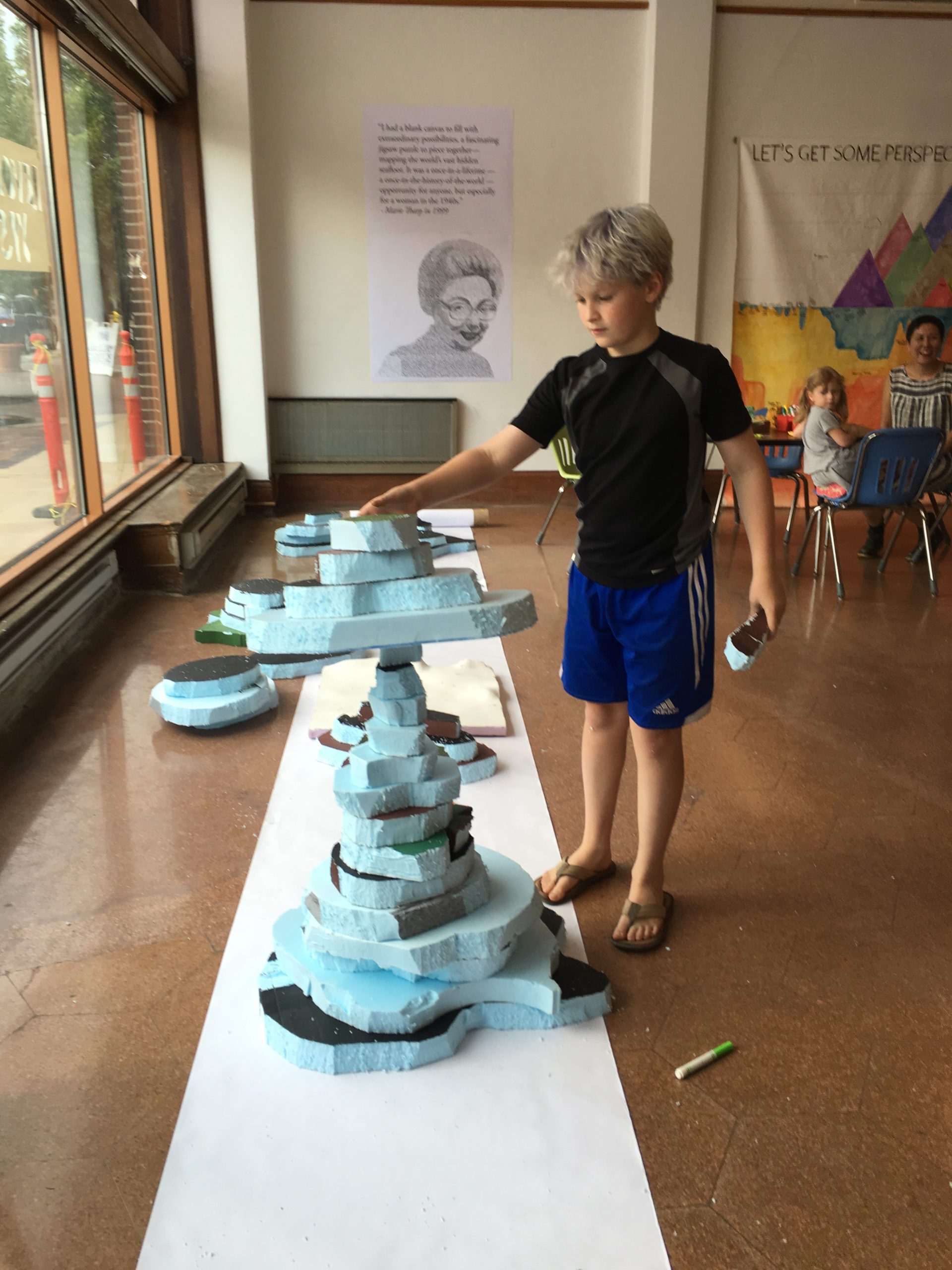